Global Screen closes deal on France, among others, for the adaptation of Michael Ende’s internationally successful book classic JIM BUTTON AND THE WILD 13

The Munich-based sales unit Global Screen, a Telepool brand, has announced a raft of sales on its spectacular live-action family adventure JIM BUTTON AND THE WILD 13 to France (Megalys Productions SARL), Middle East (Salim Ramio), CIS/Russia (Voxell), Hungary (ADS), Spain (Twelve Oaks), Portugal (NOS Lusomundo) and a worldwide airline deal with Eagle. The adaptation of Michael Ende's internationally best-selling novel – which was translated into 25 languages - is one of the most expensive feature film productions in the history of German cinema with a budget of more than 24 million US Dollars.

Offers for North America are currently in negotiation, and other territories have indicated strong interest for this opulent, visually impressive and exciting film.

„We are thrilled to announce our first deals for JIM BUTTON AND THE WILD 13. The movie not only stands out thanks to its impressive production value and look that are easily a match for big international studio productions. It also has a fantastic story and colourful blend of cultures that will make families around the globe become captivated by this bigger-than-life adventure”, says Julia Weber, Head of International Sales & Acquisitions at Global Screen.

JIM BUTTON AND THE WILD 13 tells the story of 12-year-old Jim and his best friend, the engine driver Luke. In order to protect their home of Morrowland from the notorious “The Wild 13” pirate gang, the two set off with their steam engines Emma and Molly on a dangerous journey where Jim's most fervent wish might also come true: he wants finally to find out the truth about his mysterious origins.

Hit producer Christian Becker („Vicky The Viking“, „Hui Buh – The Goofy Ghost“) and director Dennis Gansel („Mechanic: Resurrection“, „The Wave“) have not spared on special effects and have also paid great attention to detail when translating the timeless story of friendship, loyalty and courage into fascinating images as a great fantasy adventure for every generation. JIM BUTTON AND THE WILD 13 is a production of Rat Pack Filmproduktion, in co-production with Warner Bros. Film Productions Germany, JM Filmproduktionsgesellschaft, Michael Ende Productions and Malao Film as well as Moonlighting Films as a service producer. 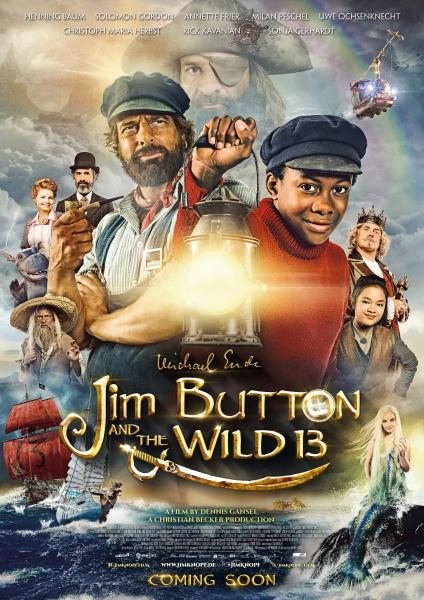